Are you interested in reading whale shark facts? Here are a few interesting things to know:

They are the largest fish on the planet.

The whale shark belongs to a group called Chondrichthyes, which includes other sea life like sharks, skates, and rays. A common question asked is “How many bones does a whale shark have?” and the answer is none! The criteria of Chondrichthyes is that they have a skeleton made up of cartilage, rather than bone. They are gentle giants and as filter feeders, they eat through filters in their mouths. Only 3 species of sharks are filter feeders including whale sharks, basking sharks, and megamouth sharks. A whale shark can have up to 3000 teeth at once and between 300 and 350 rows of teeth.

Whale sharks are considered to be harmless to humans despite their enormous size. They can reach up to 12 meters or 40 feet in length

but feed on some of the smallest organisms in the ocean called plankton.

Their appearance is incredible not only because they are so large, but also because they have a unique pattern of white spots that cover its body. They have a naturally calm demeanor, which is popular with eco-tourists that want to snorkel beside them. The pattern of spots around their gill area is unique to each individual which allows for easier identification. They have enormous mouths that can reach a width of 1 meter (more than 3 feet).

The best way to tell the difference between a male and female whale shark is that the males have two claspers near their pelvic fin.

As a species, they do not become sexually mature until they are 30 years. The females can have up to 300 shark pups at one time.

The greatest threat to sharks is the loss of prey largely due to climate change, habitat disturbance, and ocean pollution. They do not have natural predators, other than humans.

Where can you go to find them in the wild?

Whale sharks are found in the waters of more than 100 countries, most broadly found in the latitudes of 30°N and 35°S in warm and tropical temperate seas. They prefer surface seawater temperatures between 21 – 25°C (69 – 77°F) in both oceanic and coastal waters. They often congregate in areas they can feed, which is sometimes makes for a very long migration.

This map outlines the regions you can find them in the wild: 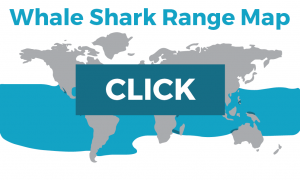 Check out these tours that offer the opportunity to see whale sharks responsibly:

harks in Mexico. To learn about their incredible ‘Whale Shark Researcher for a Day’ itinerary, click here.

Are whale sharks endangered and what threats do they face?

According to the IUCN Red List, they are listed as endangered as their population is decreasing. There are several factors that lead to this, including:

Although they live relatively long lives of more than 70 years, they reach maturity late in life and produce a low rate of offspring throughout their lives. Female whale sharks can give birth to up to 300 pups, but only 1 in 10 are expected to survive and in turn reach maturity.

They face a negative impact from humans through irresponsible tourism practices, fishing, as well as injuries from boating and ocean recreation. In traditional Chinese medicine, whale shark parts including their fins are often used, which is one of their biggest threats.

Climate change has impacted many species in the world, and whale sharks are no exception. The changing climates lead to a loss in their prey species, and the development of coastal regions creates marine pollution which takes away large portions of their habitat.

Wait, there is more! Click here to learn about the current threats to shark populations

Prefer to watch and learn about whale sharks? Check out this beautiful 2 minute National Geographic video below:

Want to be a Whale Shark Researcher for a Day?

How can you help protect whale sharks from extinction?

Here are a few ways you can help protect them:

Choose sustainable seafood. If you are unable or wish to not become a vegetarian or vegan, you can help by making smarter choices in the meats and seafood you purchase. Look for Oceanwise products or sustainably sourced seafood at your local grocery store, and make the choice to support responsible fishing.

Another way to help is by taking the KEEPitWILD Pledge! Take the pledge and show your support of keeping wildlife wild.

Prefer to watch and learn about whale sharks? Check out this beautiful 2 min National Geographic video below:

Spookiest Animals in the World