Are you fascinated by gorillas and looking to learn as much as you can about them? Here are some interesting gorilla facts to get you started:

Gorillas are considered Great Apes along with other species including orangutans, bonobos, and chimpanzees. They are each part of the Homindae family which shares 97% or more of their DNA with each other and humans!

Gorillas can live up to 40 years in the wild. The male gorilla reaches sexual maturity around the age of 15 while female gorillas start reproducing around 7 or 8 years of age. Adult males are referred to as “silverbacks” due to the silvery coloured hair along their backs. A group of gorillas generally will include one silverback and multiple females and offspring. They have fairly well developed social structures and family groups. The group sizes vary between 5 and 50 or more members.

Gorillas primarily feed on stems, bamboo shoots, fruit, and bark making them mostly herbivores. They may sometimes eat other foods like insects.

The Western lowland gorilla is the most populous of the gorilla species. They are smaller in size than the other gorillas and have a greyish-brown fur and auburn chests. They have wider skulls, smaller ears, and more pronounced brow bones than other species. In the last 20-25 years, the populations of Western lowland gorillas have declined nearly 60% due to poaching. They are listed as Critically Endangered on the IUCN Red List.

Where can you go to see gorillas?

Gorillas are found only in Central Africa including Uganda, Rwanda, and the Democratic Republic of Congo (DRC) and Cameroon. They prefer tropical and sub-tropical forests. It is recommended that you join a reputable tour operator when trekking for gorillas for a number of reasons including the safety of you and the gorillas.

The Eastern lowland gorilla is found in the DRC. The largest population is found in Kahuzi-Biega National Park. The park has been invaded by poachers in the past, however, through much work and help from the World Wildlife Foundation (WWF) and other organizations, the park staff has been working towards gaining control.

The Mountain gorilla is primarily found in the high mountains of the Congo basin. They are often caught or hurt by snares meant for other wildlife. They are the most common gorilla to see on a gorilla trek as they are found in Bwindi Impenetrable National Park and Virunga Mountains.

The Western lowland gorilla is found in Cameroon, the DRC, the Central African Republic, Equatorial Guinea, Gabon, and the Republic of Congo. They are the most widespread of the species but have faced a rapid decline of populations landing them as Critically Endangered.

The Cross River gorilla is found in the Congo basin between Cameroon and Nigeria. They live primarily in a protected area. 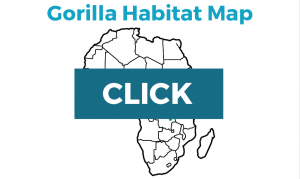 What threats do gorillas face?

Different species of gorillas face different threats. Some exist in protected areas but are not exempt to poaching and other threats. Here is a species-specific breakdown of their top threats:

The Eastern lowland gorilla is mainly threatened by habitat loss, fragmentation, mining, and civil unrest. Only a small portion of their habitats lies in a protected area, but it is difficult for park rangers to patrol the borders. Illegal mining is a big contributor, primarily coltan, diamonds, tin, and gold. Because the areas of their habitats have been largely impacted by civil unrest, conservation is difficult.

The Mountain gorilla faces a series of threats including habitat loss, disease, charcoal making, and poaching. Gorilla habitats have been cleared for agriculture and livestock, forcing them to move to higher elevations. The war and genocide in Rwanda in the 90s and unrest in the Congo sent refugees up to these areas leading to the destruction of habitat and a rise in poaching. 140 Virunga park rangers have been killed in these mountains since 1996.

The Western lowland gorilla is vulnerable to disease and poaching as the largest threat to their populations. The Ebola virus has largely impacted numbers of these gorillas as well as chimpanzees. It is estimated the disease has killed off a third of the gorilla population, many of this the western lowland gorilla. The largest die-off was in the Minkebe Forest where 90% of the population of gorillas and chimpanzees have succumbed to the virus.

The Cross River gorilla is at risk for inbreeding as well as hunting. Because so few of these gorillas are left in the wild, there is a lack of genetic diversity. There is a lack in the enforcement against illegal hunting of these gorillas, so although there are conservation efforts, the amount of hunting largely counteracts them.